On 4 July 2013, Taiwanese army corporal Hung Chung-chiu died from multiple organ failure after being forced to undergo solitary confinement and consecutive days of drill exercises in a military detention centre. 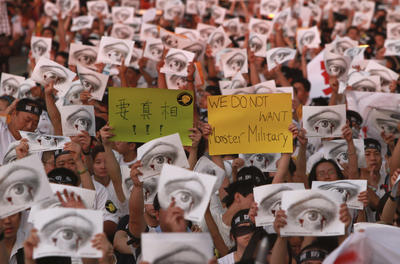 The military judiciary’s failure to provide answers to the suspicious circumstances surrounding Hung’s death, such as the existence of three contradictory death certificates and missing surveillance camera footage of his punishment exercises, has created a massive public backlash. Since 3 August, close to 250,000 people have descended on the Ministry of National Defense to protest the death of Hung, accuse the ministry of cover-ups, call for justice, and voice other allegations of abuse. The 24-year-old was being punished for taking a mobile phone with a camera onto a military base. His family argues that his excessive physical punishment was authorised by his superiors to prevent the corporal from going public on their corrupt and questionable behaviour.

Hung’s case has become a setback to President Ma Ying-jeou’s desired military reform, in particular the transition of the armed forces into an all-volunteer force by 2015. Introduced in 1949 by the Kuomintang, conscription was a response to the real and imminent threat of attack from the Chinese mainland and the context of the Cold War. However, since Ma’s election in 2008, closer economic and political ties to the mainland have seemingly diminished the possibility of conflict. Similar to other Asian nations with conscription, young Taiwanese men now view conscription as an impediment to establishing careers, especially at a time when regional economies are stagnating. Even prior to Hung’s death, the army struggled to attract recruits and many questioned the need for compulsory military service despite the cross-Strait status quo.

It is therefore no surprise that the majority of demonstrators were mainly students and young professionals — the generation that has been hit hardest by President Ma’s failure to revive Taiwan’s economy. This year, youth unemployment hit 13 per cent, compared to the country average of 4 per cent. Taiwan’s worsening demographics (it has the third-lowest birth rate in the world) have exacerbated negative attitudes towards conscription.

Troubles with recruitment, leadership woes, ongoing corruption charges and insufficient resources are also increasing concerns that Taiwan’s Armed Forces are hollowing out. In the wake of the protests, the defence minister, Kao Hua-chu, has resigned, and 18 other military officials have been indicted on charges of abusing a subordinate to death, impinging upon individual freedom, and punishing personnel beyond existing regulations. Kao was replaced by Andrew Yang, the first civilian to head the department. Although this was a landmark move for Taiwan’s young democracy, Yang resigned just six days into the position, after acknowledging that he plagiarised parts of his 2007 book. These troubles come at a sensitive time for President Ma, who is already battling low popularity ratings.

Taiwan’s plan to abolish conscription also coincides with a dramatic decrease in defence spending over the past decade. Despite President Ma’s promise to increase the military budget in response to China’s ever-increasing military modernisation and acquisition programs, defence spending dropped to 2.1 percent of GDP this year. Given shrinking national revenue, and the paltry US$16 billion spent on US defence acquisitions since 2008, Taiwan is unlikely to reach President Ma’s goal of 3 per cent of GDP for defence spending. Compared to China’s $US102 billion defence budget, Taiwan’s $US10 billion has underscored the increasing quantitative and qualitative advantage the mainland has over Taiwan.

Currently, the People’s Liberation Army has roughly 10 times the number of troops as Taiwan’s Armed Forces. It also has an absolute advantage in terms of ballistic missiles and submarines. Moreover, next year the term for compulsory basic training will be reduced from one year to four months for those born after 1994. A reduction to 220,000 personnel is also planned, with almost all of these cuts coming from the army. Although the reductions are arguably to create a more professional, dedicated military that will continue to benefit from US training, it is doubtful that such a small force will be able to withstand a Chinese offensive. Added to that, Washington’s growing reluctance to sell Taiwan advanced military equipment — as demonstrated by the F16A/B deal — has meant that China has both the manpower and technological advantage over the Strait.

Hung’s death has proven to be a vocal catalyst for a public confidence crisis with Ma’s administration, particularly his handling of the defence ministry. More troubling is that the incident has exposed Taiwan’s increasing military vulnerability and cast doubt on its ability to deal with a possible Chinese attack, a contingency that has never been taken off the table by Chinese authorities.

Sheryn Lee is a PhD student in Political Science at the School of Arts and Sciences, University of Pennsylvania.